Meet the founder and CEO of coderGirls, who is a student on a mission to inspire female students to pursue STEM careers.

Meet an upcoming woman in STEM: Briana Berger from Gainesville, Florida. She just graduated from F.W. Buchholz High School and is off to college in the fall where she will be attending Stanford University as a computer science major. Over the summer, Briana will be interning at Expedia in San Francisco as a software developer for their mobile team. IMAGE URL: 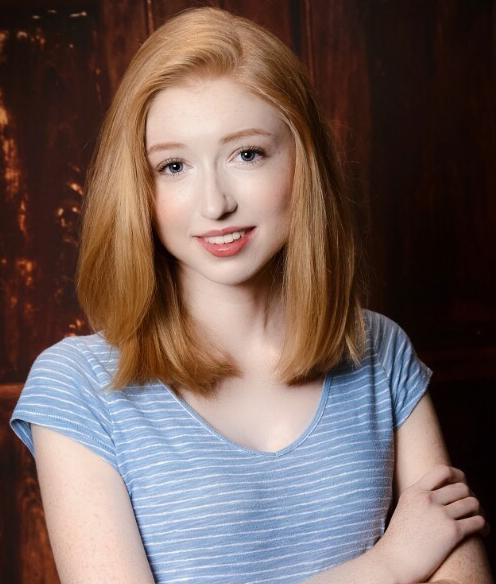 As if that’s not impressive enough (and, let’s be honest, it is super impressive), she’s also the founder and CEO of coderGirls, which is an international nonprofit to educate and empower female students, K-12, in technology through chapters, global competitions, mentorship program, inspire_her and creative curriculum. Briana’s advocacy for computer science has allowed her to serve as a member on the National Girl Scouts of America Computer Science Advisory Board. On a local scale, she also has a nonprofit, SeniorTechNet, which works to teach senior citizens how to use modern technologies. In terms of coding languages, Briana knows her stuff: ROBOTC, Java, Python, Swift, HTML5, CSS3, JavaScript, SQL, PHP, jQuery, MITAppInventor and Scratch. According to Briana, her career goal “is to be a CEO of my own company or to be in a leadership role someday at large technology company. I also hope to write a few books about self-improvement.” Read on to learn more about this upcoming woman in STEM and her plans to change the world in the future. She’s just getting started and has already accomplished so much – we can’t wait to see what’s in store for this young woman’s bright future. Note: Briana Berger is our fourth woman in STEM highlight within our Women in STEM series. You can find the first highlighted woman in STEM here, the second highlighted woman in STEM here and the third woman in STEM here.

1. What grade are you in? Where do attend/plan on attending college?

I’m a graduating senior, and I plan on majoring in computer science at Stanford University.

2. Did you apply for and/or obtain any scholarships?

3. Do you have any advice for students on gaining scholarship search success?

4. Have you had any internships? If so, what did you learn from them?

I had an internship at the University of Florida under their autonomous car project as a computer vision intern. I conducted research under a professor and a graduate student at the University of Florida to analyze how computer vision can improve the problem of occlusion at urban traffic intersections. In my research, I investigated which computer vision method can provide the most accurate results, and to see how severe the problem of occlusion is at intersections. This upcoming summer, I will be a software developer intern/apprentice at Expedia in San Francisco under their mobile development team. Take advantage of internships and fellowship opportunities for women in STEM.

5. Tell us more about your organization, coderGirls. How did you get it started?

It was an early morning during middle school, and my teacher rose to the front of the class to teach us the quadratic equation. I was immediately on the edge of my seat with questions bursting in my mind, asking how it was discovered, and what the proof for this mathematical mystery is. I, too, am an equation with many variables and constants. Yet, some aspects of myself were not rooted in my equation. For instance, my love for computer science was foreign to my family and to societal expectations. I had to research countless tutorials and books to learn. I was on my own in a world of new syntax rules and infinitely many unknowns. Standing in my own footsteps, I knew that many girls weren’t interested in coding. With that in mind, I aimed to get more girls involved. To achieve my goal, I started coderGirls as a local initiative to show girls the beauty of computer science while connecting code to their passions, such as music or animations. I remember anxiously waiting for our first meeting, and all I could think was: Will any girls come? Thankfully, girls began to pile in, and within minutes, I could hear the girls typing away on their keyboard. My favorite moment was when one girl finally debugged her code. She immediately jumped in her seat and the look of excitement on her face kept me going. Experiences like that made me realize it doesn't matter how many girls I impact as long as I make a meaningful impact. With that in mind, coderGirls began to expand from statewide to nationwide to international. To say the least, the organization took a lot of twists and turns to get to where it is. However, for me, it shows that all it takes to create something is an idea with a little bit of faith, trust, and code. With that in mind, coderGirls began to expand from statewide to nationwide to international. Now, coderGirls is an international nonprofit that educates and empowers over 500,000 female K-12 students in computer science through 40 chapters in over 10 countries, such as Bangladesh, Nepal, Ukraine, Philippines, etc. Also, we are partnered with White House’s CSForAll, National Center for Women and Information Technology (NCWIT) and others. At the moment, we are working with the National Girl Scouts of America for our courses to be used in their computer science curriculum and to create a coding badge, which can potentially affect 2.7 million girls.

6. What made you passionate about coding?

It all started when I googled some Java tutorials in middle school. I typed in the simple code: System.out.println(“Hello World”). I could barely contain my excitement as my mouse clicked on the run button. It loaded and loaded and loaded. Then, an error message popped up alerting me that I made the classic coding error of forgetting a semicolon. Within minutes, I fixed the error and the beautiful message of “Hello World” was printed, yet the error made me fall in love with code. Since then, my fascination with computer science has been an infinite loop ranging from the simplest troubleshoots to solving real-world problems. I see coding far more beyond zeros and ones. I see it as a means to impact humanity.

7. What advice do you have for students interested in a similar educational path?

I’m an idealist-realist. It is a juxtaposition of words; however, it explains how I see my dreams and my goals. I set my goals high, but I look at my dreams realistically by working towards the overarching goal with steps and determination. I think the number one piece of advice for students is to aim high and set the goals to get there. Even if you don’t get there, you will land among the stars.

8. What specific advice do you have for female students interested in a similar educational path?

Stick it out. Sometimes it will be tough… You will sometimes feel like an imposter. I know for myself even my own dad has questioned my decision to major in computer science. I have had to defend my intelligence to “the boys.” I’ve been one of the only girls in my computer science class. It is tough, but I encourage you to stick it out. Stay persistent. Don’t let the stereotypes get to you, and surround yourself with other girls interested in coding by getting involved with organizations like coderGirls, National Center for Women and Information Technology (NCWIT) and Girls Who Code, etc.

9. What qualities should students thinking about pursuing a STEM career have in order to be successful?

If I had to say the most important quality you should have as a student pursuing STEM, I would say that you need to be persistent. You will fail a lot. You will succeed sometimes. You need to survive the valleys and enjoy the peaks. The valleys build the peaks. The practice and the failures develop you and make you better in your field.

10. What’s it like being a successful woman at such a young age in a male-dominated field? Any advice?

It is interesting. To get a good idea of gender in success and male-dominated fields, look at the word “bossy.” Have you ever called a man bossy? Have you ever called a woman bossy? The point is women of success and of leadership are often judged and seen negatively due to not meeting societal expectations. My advice is once again, stick with it. Don’t let the negativity get to you. But, whenever people publicly try to weigh you down or any other female of leadership or of STEM, address their bias and teach them where their bias lies.

11. How did/do you balance working on an organization, keeping up with schoolwork, scholarship searching & applying to college?

It is a lot of scheduling my time. For a majority of my time, I plan out each day on a hourly basis to make sure I get everything done. I also use my summers and free time to plan out what scholarships, awards, and college I will apply to. In terms of colleges, I created a few documents for myself that detailed due dates and requirements as well as an excel sheet for what had to still be submitted. I use Fastweb, friend referrals, and other resources to discover scholarships that qualified for me, and then, I used another excel sheet to keep track of all due dates and requirements once again.

12. What do you think the solution is to get more females in STEM fields?

I think the solution is start teaching girls programming while they are young as gender stereotypes are instilled in children. For instance, in the Journal of Experimental Child Psychology, they assessed 6-year-old children’s stereotypes about STEM fields and tested an intervention to develop girls’ STEM motivation despite these stereotypes. First-grade children held stereotypes that boys were better than girls at robotics and programming. Yet, when the girls experienced programming, their interest and confidence in those subjects rose. So, I believe a coding education is needed to start for girls when they are young and continuing the education throughout K-12 to lessen the gender stereotypes and allowing girls to feel as if they belong in the field.

If you have a question for our featured upcoming woman in STEM, Briana Berger, send an email to ask Briana your question today.